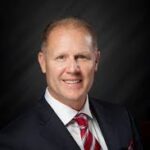 Chris May once told an interviewer that he never aspired to be a politician, but “the dominos kind of just fell at the right time.”

He got involved in 2004, volunteering to support Mitch Daniels’ campaign for governor. Two years later, the Bedford resident was encouraged to run for an open seat on the Lawrence County commissioners. He ran, and he won.

May moved on to the Statehouse in 2016, after Eric Koch left his seat representing House District 65 to run for the state Senate. May handily won a six-way Republican primary, then won in the general election with 62% of the vote. He was re-elected in 2018 and 2020 with even bigger shares.

District 65 includes most of Lawrence County, all of Brown County and parts of Monroe, Jackson and Johnson counties. With its population base in conservative Lawrence County, including the city of Bedford, the district has been reliably Republican in recent years. It’s a largely rural district that includes Brown County and Spring Mill state parks as well as stretches of the Hoosier National Forest.

May grew up in the Lawrence County town of Oolitic and graduated from Bedford North Lawrence High School and Vincennes University. He works as a sales engineer with Whitney Tool Co. in Bedford and owns and operates Hoosier Tech Properties, a real estate firm.

In the House, he has been an advocate for local government, small businesses and workforce training and has authored several bills on children’s issues. He is vice chair of the House Small Government Committee and serves on the Judiciary, Interstate and International Cooperation, and Veterans Affairs and Public Safety committees. – Steve Hinnefeld 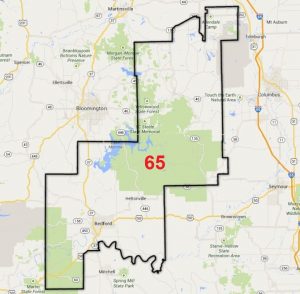