Indiana House District 1 extends from the Illinois line through the cities of Hammond and much smaller Whiting. Like nearby East Chicago – an EPA Superfund site after confirmation of lead contamination in a public housing community – and Gary to their east, Hammond and Whiting are much smaller than they were 50 years ago. Hammond’s population has declined by nearly a third and Whiting’s by more than half with the decline of industry in the Midwest, particularly the steel industry. Hammond, though, has a more diversified economy than its neighbors, relying more on light manufacturing, transportation, warehousing and the service industry. In the last census, by virtue of having lost population at a slower rate than the other cities, Hammond became the largest in Lake County at 80,000.

The district has been represented since 2018 by Democrat Carolyn Jackson, who worked in Chicago for 30 years as a Cook County probation officer and supervisor and served on Hammond city boards. She succeeded a nine-term incumbent who retired to live in Brown County only to come out of retirement as the Democratic candidate for lieutenant governor in 2020.

In her first session, Jackson was listed as an author on eight House bills, including one to require the testing of drinking water for lead and copper, an ongoing concern particularly in East Chicago; none made it out of the committees to which they were assigned, a common fate for legislation coming from a Democratic caucus that is outnumbered 2-to-1 in the House. In 2020, she was more successful, introducing a bill with Republican co-authors to mandate testing of all drinking water in schools statewide by the end of 2022, and in Lake County for every two years thereafter, and to require steps to reduce contamination where it is found; the bill was passed unanimously and signed into law.

Also in 2020, Jackson was a co-author on a bill that proved more controversial, proposing that the state cede ownership of shoreline property along Lake Michigan to those adjacent property owners with deeds stating their ownership extends to the lake; the bill also would have limited public use of the shoreline. “If I picked a piece of property because my deed said I owned the property to the water, I wouldn’t be happy either,” said Jackson, quoted in the South Bend Tribune. “It seems we should be looking for a way to find a solution that’s more suitable for everyone.”

The district, like others adjacent in Lake County, is solidly Democratic and no longer contested by Republicans. Jackson defeated a Libertarian opponent by 10,000 votes in 2018 and an opponent in the Democratic primary in 2020; she ran without any opposition in 2022. – Kevin Morgan 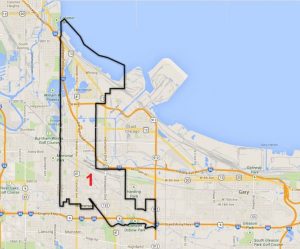