District 100 is a reliably Democratic urban district that extends east of Indianapolis and includes the neighborhoods of Irvington and Fountain Square. Dan Forestal, a firefighter and nephew of Marion County Sheriff Kerry Forestal, was the choice of the Democratic Party in 2012 when he first ran and was re-elected by wide margins in subsequent elections.

After an arrest in August 2019 and frequent absences during the 2019 and 2020 legislative sessions, Forestal had begun laying the groundwork to seek another term but ultimately withdrew from the race, clearing a path for Robert Blake Johnson, an Indianapolis City-County Council member, to run. Following another arrest in June 2020, Forestal resigned and Johnson, who represented part of the district as a council member, was appointed to fill the vacancy. In November 2020, Johnson won election in his own right with 67 percent of the vote against a Republican opponent. – Janet Williams

President and CEO of IndyHub, a local non-profit that advocates on behalf of 20-and 30-somethings in Indianapolis. Also worked at an education nonprofit, Complete College America. 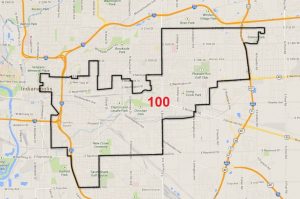