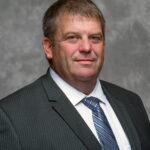 Indiana House District 12 covers most of rural Elkhart County outside the city of Elkhart and extends south into a corner of Kosciusko County that includes summer tourist destination Lake Wawasee. It has been represented since 2016 by Republican Blake Doriot (rhymes with Oreo), who previously held the office of Elkhart County surveyor for 24 years. Doriot, a lifelong resident of Elkhart County who now lives in Goshen, said the retiring incumbent and Republican Senate leaders persuaded him to run for the seat. In an interview soon after his election, Doriot said his legislative priorities included the legalization of CBD oil for the treatment of epilepsy and other medical conditions and adjustments to Indiana’s sales tax on recreational vehicles; Elkhart is called the RV Capital of the World.

During his first session, Doriot was co-author of a bill to legalize CBD oil and on the Senate floor argued emotionally for its passage, describing his son’s ordeal with epilepsy and that of a friend’s child with a more severe disorder that triggered a dozen seizures every day. The bill passed both the House and Senate but did not emerge from a conference committee. A House bill containing similar provisions, with Doriot among the Senate sponsors, passed and was signed into law, and restrictions on CBD and hemp were further loosened in subsequent sessions. He was the 2019 recipient of the Epilepsy Foundation of Indiana Legislator of the Year Award. Doriot also was successful in introducing and guiding into state law a provision to temporarily exempt out-of-state buyers of recreational vehicles from paying Indiana sales tax, a provision he said did away with double taxation when buyers were taxed additionally in their home states. He had said dealers in Elkhart had been at a competitive disadvantage with states such as nearby Michigan, and some had gone out of business. In 2020, Doriot authored legislation, passed and signed into law, to create the Sexual Assault Victims Bill of Rights as well as legislation to increase the line of duty death benefit for Indiana police officers and firefighters. As assistant majority whip, Doriot has moved into the leadership ranks of the Senate Republican caucus.

In 2019, a state representative and three legislative staff who had accused Indiana Attorney General Curtis Hill of sexual misconduct filed legal documents in which they identified Doriot among legislators and others who had made remarks that seemed to question or make light of their accusations. In 2020, Doriot drew attention when a bill that he had authored, dealing with zoning and manufactured homes, was amended late in the session to nullify local ordinances dealing with tenant rights such one recently passed in Indianapolis. As chair of the conference committee hearing the amended bill, Doriot was criticized for cutting short public testimony. The amended bill later passed but was vetoed by Gov. Eric Holcomb.

In various configurations since the mid-1960s, Senate District 12 has elected only Republicans. Doriot won the general elections in both 2016 and 2020 by the same 2-to-1 margin that his predecessor had in 2012. — Kevin Morgan 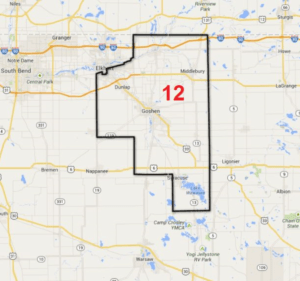