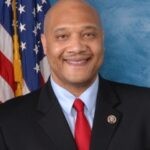 Democrat André Carson of Indiana, an occasionally outspoken progressive active in the Congressional Black Caucus, used his seat on the House Intelligence Committee to make the case that President Donald Trump “betrayed America” and was “a major threat to our national security.” As a Muslim, he was a sharp critic of the travel ban that Trump imposed on several majority-Muslim nations. Carson won his seat in a 2008 special election to succeed his grandmother, Julia Carson, who died in office. In his majority-white district, he has not been seriously challenged for reelection.

Originally interested in the priesthood, Carson converted to Islam and became the second Muslim elected to Congress. Carson also had an artistic side. He wrote poetry as a young man and performed as a rap artist under the name “Juggernaut.” With a career in law enforcement in mind, he got a bachelor’s degree in criminal justice management from Concordia University and a master’s degree in business management from Indiana Wesleyan. Carson spent nine years as a plainclothes officer of the Indiana Excise Police, which enforces alcohol and tobacco laws. “I loved law enforcement,” he told Esquire magazine in 2010. “But this job sure beats sitting and waiting for something bad to go down at three in the morning.”

He recalled that his political interest began in 1984, at age 10, when he attended the Democratic convention in San Francisco and heard civil rights leader Jesse Jackson speak. Carson said his thinking was transformed by reading The Autobiography of Malcolm X, and he attended Nation of Islam leader Louis Farrakhan’s Million Man March in 1995. In 2007, at age 32, he won a seat on the Indianapolis City-County Council, his first elected office.

After Julia Carson died in December 2007, her grandson faced significant opposition for the Democratic nomination in the special election to fill the remainder of her term. At the Democratic caucus, he won a bare majority with 223 of the 439 votes. Against Republican state Rep. Jon Elrod, a lawyer, Carson received extensive assistance from the Democratic Congressional Campaign Committee. He called for withdrawing U.S. troops from Iraq, endorsed tax cuts for working families, and said companies should have incentives to keep them from sending jobs overseas. He won, 54%-43%. Carson has faced minimal opposition since, including in the Democratic primary, though his vote in the general election has been relatively small compared with most other Black Caucus members.

In the House, his voting record has been mostly liberal. He has placed near the center of House Democrats in the Almanac vote ratings. He initially opposed the $700 billion bailout of financial markets in 2008, but switched his position after Barack Obama, then the Democratic presidential nominee, urged him to support it. Carson has been a senior whip for the Democratic whip organization.

As the first Muslim to get a seat on the Intelligence Committee, Carson’s selection produced protests from some conservative activists. He has won committee approval of his amendments to increase the transparency of government efforts to counter violent extremism at home and abroad, calling it “critical that we maintain strong oversight of these programs to protect American privacy and civil rights. ”During the 2016 campaign, Carson voiced concern about what he called Trump’s anti-Muslim rhetoric. “That saying about ‘Make America Great Again’ is a form of meta-messaging to a certain segment, we're talking about our white brothers and sisters, largely blue collar,” he said. When the Supreme Court in 2018 upheld a modified version of the travel ban in a 5-4 decision, Carson called it “a shameful sanctioning of discrimination.”

Carson has chaired the Counterterrorism, Counterintelligence and Counter proliferation Subcommittee. Prior to House action on impeachment, he told Politico that Trump should be held accountable for “fanning the flames of Islam phobia, xenophobia and outright hatred. ”During the panel’s hearings during the House impeachment inquiry, he said Republican silence on the allegations was “deafening—because the more facts we learn, it becomes harder to defend the indefensible.”

With the election in 2018 of two Muslim women to the House—Ilhan Omar of Minnesota and Rashida Tlaib of Michigan—Carson used the opportunity to spotlight Muslim culture. In May 2019, they hosted the first dinner on Capitol Hill that broke the daily fast during Ramadan. “This sacred time of fasting and sacrifice is a special opportunity for a diverse community of Muslims worldwide to grow closer to our faith and each other, and to reflect on our many blessings,” he said. Earlier, when Omar’s security was not adequately protected following criticism of her anti-Semitic statements, Carson said that House officials had been “slow to respond to death threats” against her.

In his district, which includes nearly three-fourths of Marion County, the 62 percent of the vote that Carson received in his 2020 reelection slightly trailed the 64 percent that Biden won countywide. In 2016, the 60 percent for Carson edged out the 59 percent that Clinton won in the county. -- The Almanac of American Politics 2022