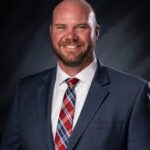 Indiana House District 42 extends through six rural counties along the Illinois state line, skirting the northern edge of Terre Haute and adjacent coal country; it includes Shades and Turkey Run state parks. The district has been represented since 2012 by Republican Alan Morrison, a sports management graduate of Slippery Rock State College in Pennsylvania with a master’s in the same field from Indiana State. He began his career in sales for the Flint Generals, a minor league hockey team in Michigan, before moving to a job in the athletic department at Rose-Hulman, where he later worked in fundraising, a job he left in 2015.

Morrison’s hiring into his next job, in sales for General Alarm, drew scrutiny because it occurred after he voted in favor of vaping-related legislation that benefitted a firm of which his new employer was a division. Morrison denied any connection, telling The Indianapolis Star, “I sell residential and commercial-grade alarm systems. I have nothing to do with e-liquids or the monitoring of them or anything like that. To say that I benefitted would be more than a stretch.’’

Morrison was an early advocate of expanding gaming in Indiana to include wagering on sports, introducing his first bill to allow it in 2014; it did not advance beyond a House committee, nor did others that Morrison authored in subsequent years. In 2015, he introduced two bills – one to allow sports betting in casinos and off-track-betting venues and another to allow casinos to offer fantasy sports games, both of which he argued would allow the state to cash in on a phenomenon already taking place illegally and also keep Indiana from falling behind other states in gleaning the resulting tax revenue. In 2019, the legislature enacted a sweeping expansion of gaming statewide that included sports betting more wide-ranging than what Morrison had proposed; he was not listed as an author or co-author of the bill and voted in favor of it.

Also in 2019, Morrison authored a bill to bar Indiana employers who would require that workers be implanted with an identification or tracking microchip as a condition of employment; he said the practice was growing nationally and several other states had enacted similar legislation to control it. The bill did not advance but Morrison introduced it again in 2020, when it passed and was signed into law. In 2020, Morrison was instrumental in the passage and enactment of a bill that slowed down the phasing out of Indiana’s coal-fired utilities; he successfully proposed an amendment requiring that former coal miners have priority for job training grants, an addition to the bill that might have made it more palatable for a majority of lawmakers to support. Also in 2020, VanNatter broke with party leadership to vote against some key bills in the Republican legislative agenda including raising the age to buy tobacco and vaping products to 21 and making it an infraction to hold a cell phone while driving. In 2022, he followed leadership in voting for the landmark abortion ban and in opposing attempts to remove rape and incest as exceptions to it.

The district, represented by Democrats for 30 years, was redrawn along more rural lines after the 2010 census; the Democratic incumbent retired and Morrison was elected by only 106 votes in 2012. He’s won by increasingly comfortable margins since, and garnered 66% of the vote in the 2020 general election. – Kevin Morgan 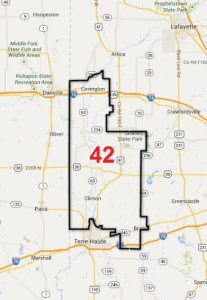