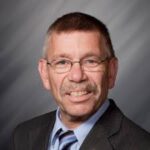 Indiana House District 73 includes six counties in the heart of southern Indiana and some of its most iconic landmarks – the hometown of Hoosier astronaut Gus Grissom, the caves and sinkholes of Spring Mill State Park and the ski hills of Paoli. The district is also near the epicenter an opioid epidemic that during the past decade triggered outbreaks of HIV and led to the state’s first needle-exchange program.

Until his death of cancer at age 63 in September 2021, it was represented by Republican Steve Davisson, a pharmacist from Salem in Washington County, adjacent to the county from which the outbreak first spread in 2015; one of two pharmacists then in the Indiana General Assembly, his decade-long legislative career focused on issues of substance abuse and public health. A vote of District 73 GOP officials appointed Davisson's son, J. Michael Davisson, as his successor.

The district had been held by Democrats for more than 40 years when Davisson was elected to an open seat in 2010. It is now one of many in southern Indiana which form the bedrock of Republican supermajorities in both chambers. Davisson won reelection by increasingly wide margins and ran unopposed in 2018 and 2020.  – Kevin Morgan