What a difference a decade or two can make, at least in a Marion County legislative district. Until 2000 and in some areas well beyond, most outside Center Township were held by Republicans; 20 years later, Democrats hold the majority outside the county’s southern third. The change is particularly striking in House District 92, which includes the town of Speedway and surrounding Wayne Township, a collection of midcentury inner suburbs on the Indianapolis Westside that continue to grow more racially diverse.

Republicans held the seat without much competition until the past decade. In 2011,  a six-term Republican incumbent was caught trying to set up an extramarital tryst and opted not to seek reelection; Democrat Karlee Macer won the seat in 2012 and held onto it with increasingly comfortable winning margins, running without opposition in 2018. She flirted with a run for governor in 2020, but decided against it while also opting not to seek another term in the House, where she labored in a badly outnumbered minority for her entire tenure.

Macer’s successor is Renee Pack, a community liaison in the Wayne Township school district and real estate agent who lost a bid for Wayne Township trustee in 2014, her first run for political office. Republicans didn’t field a candidate nor did any other Democrats contest the primary, providing Pack with a clear shot that is highly unusual in an open legislative district. Her Facebook campaign page included posts supporting an increase in the minimum wage, repeal of right-to-work laws and more support for Indiana teachers as well as announcements of her endorsements, including those from Macer, several incumbent Democratic legislators and the Indiana AFL-CIO.

It was on the issue of abortion, though, that Pack emerged as one of the strongest voices in her caucus in opposing the 2022 ban. During the final round of debate on the House floor, Pack rose to speak just after Republican iconoclast  John Jacob -- an opponent of any exceptions to the ban -- referred to abortion as murder and women who undergo them as murderers. She shared her story of undergoing an abortion 30 years before, when she was serving in the U.S. Army, and then turned to Jacob, saying, "Sir, I am not a murderer. And my sisters are not murderers either.'' -- Kevin Morgan 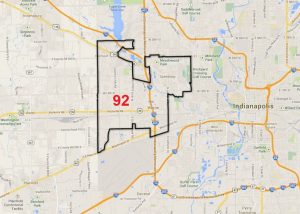