Indiana House District 9 extends south from the dunes and beach communities along Lake Michigan to a succession of farm towns along U.S. 421. In between is its largest city, Michigan City, which enjoyed a higher profile in the Indiana House for most of the past decade because it was represented by Scott Pelath, vocal leader of the House Democratic caucus. Pelath left the legislature in 2018 and was succeeded by Patricia “Pat” Boy, a Michigan City Councilwoman.

Boy was one of four women to succeed men in the House Democratic caucus, making it the first majority female caucus ever in the Indiana General Assembly. Though softer spoken and lesser known than Pelath, Boy had a compelling story. An automobile accident left her husband a quadriplegic, leaving her to run their family business while navigating the health care system and paying his medical bills; he died in 2016.

In a candidate questionnaire published in the Chesterton Tribune before the 2018 primary, Boy said she was campaigning on themes of social, economic and environmental justice – specifically, “good jobs, training and workers’ rights; gun safety (not ‘taking away your guns’); affordable health care; living wages; election reform; redistricting reform; support for education and educators; environmental protection; and the drug epidemic.’’ Her legislative efforts during her first term included many of those issues and others on most progressive agendas – bills that would increase teacher pay, legalize medical marijuana, repeal right-to-work, require voting by mail and include mention of gender identity and sexual orientation in the state’s hate crimes law.

Though Democrats increased their numbers in 2018, Republicans still enjoy a 2-to-1 supermajority, and none of Boy’s bills made it out of committee. Another of her first-term bills, also a non-starter, would have established a commission to reform redistricting; during her campaign, Boy decried gerrymandering as resulting in “districts that do not correctly represent the population and discourage voter participation because they are not competitive. Voters should choose their representatives, not the other way around.’’

With urban, suburban and rural populations, Boy’s district might shape up as one of the more competitive in the legislature; in the 2016 election, it included a mix of Clinton and Trump precincts. Democrats, however, have held the district since 1986; Pelath was unopposed in his last two runs for reelection. Elected with 60% of the vote in 2018, Boy was the only candidate in either primary in 2020, but a late Republican entry was added to the ballot before the June 30 deadline; Boy won a second term by 3,500 votes. — Kevin Morgan 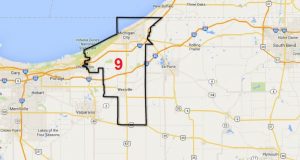