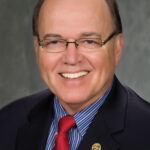 Indiana Senate District 22 sits just north of the burgeoning cities and suburbs of Hamilton County, the fastest growing of Indianapolis and Marion County’s ring counties. Anchored by Kokomo, the manufacturing-heavy Howard County seat of an estimated 58,000 people, District 21 takes in farming communities stretching from northern Hamilton County to Tipton County and Howard County, with parts of Clinton and Grant counties.

Sen. Jim Buck, a retired journeyman tool and die maker and real estate broker, has represented the district since 2008, when the Kokomo Republican was selected to finish the final two years or a four-year term when state Sen. Jeff Drozda retired. Before that, Buck served in the Indiana House of Representatives, first elected in 1994.

Buck is a governing board member of the American Legislative Exchange Council, a prominent advocate for conservative thought and lawmaking, particularly through model bills targeted for business deregulation, school choice and tax reform. Tagged by the Center for Media and Democracy as a “corporate bill mill,” ALEC, on its site, calls itself “America’s largest nonpartisan, voluntary membership organization of state legislators dedicated to the principles of limited government, free markets and federalism,” providing a forum to “develop real, state-based solutions to encourage growth, preserve economic security and protect hardworking taxpayers.”

Buck was ALEC’s governing board chairman in 2020. In 2012, Buck advocated, via ALEC, for a target on federal spending and debt, calling on state legislatures to force Congress’ hand on a balanced budget measure by calling for a convention of states to propose a constitutional amendment. “State legislators must take the long-sighted view and exercise our rights within the Constitution to limit Congress’ ability to drive our nation into further economic decay,” Buck wrote in a piece posted on ALEC’s site.

Buck, chairman of the Senate Local Government Committee, has pressed similarly conservative lines within a Republican supermajority in the Indiana General Assembly. In July 2020, Buck was among five state senators who challenged Gov. Eric Holcomb’s initial mask mandate as the coronavirus pandemic escalated over the summer. Buck and the others asked Indiana Attorney General Curtis Hill for an opinion on whether the governor had the authority to impose criminal penalties for refusal to wear a mask in public settings. Hill said Holcomb didn’t. The governor didn’t follow through on attaching misdemeanor status on his statewide mask recommendation.

Buck also was among three state senators who pushed back in April 2020 on early pandemic restrictions on gun sales during the public health emergency. Hill agreed with Buck and the others that counties and cities didn’t have authority to restrict or prohibit the sale of firearms or ammunition during an emergency declaration.

Buck was part of a successful push to eliminate the state’s elected Superintendent of Public Instruction position in favor of a cabinet-level job appointed by the governor – a change in play in 2021. "What we're trying to do is bring to the office of the governor, not more power, but more coordination for the growth of jobs in this state," Buck said during 2019 debates.

In 2020, Buck made waves when he introduced a bill that would have eliminated primaries for U.S. Senate races in Indiana, leaving the job to political parties at their state conventions. Buck offered it as a way for the legislature to gain some control over representation in Washington, D.C., and to get a better grip on federal spending, lost in 1913 when the 17th Amendment took the power to pick U.S. senators from state lawmakers and gave it to the voters. “You're either going to address it now or you're going to regret it later," Buck testified on the bill, according to reporting by Dan Carden of the Times of Northwest Indiana. Buck’s bill did not survive. Meanwhile, during the same 2020 session, Buck held up a bill in the Local Government Committee that would have eliminated the remaining township assessor positions across the state by 2023. Buck argued that "the government closest to the people serves the people best" and that he did not like “the legislature, in this case, being the executioner of offices that the people chose to keep,” according to reporting by the Times of Northwest Indiana.