Indiana House District 5 extends north from South Bend to the Michigan state line and east through St. Joseph County, a collection of suburbs and small cities like 20,000-population Granger. It is represented by Dale DeVon of Granger, a custom home builder who is national director of the Home Builders Association. DeVon was elected in 2012, succeeding a Democrat who had represented the district for 24 years before retiring; DeVon’s win was among those that helped Republicans secure a 2-to-1 supermajority in the House.

In an interview soon after his election, DeVon said his priorities as a legislator would include affordable housing and protecting young people. In 2018, he authored a bill, passed and signed into law, that required the Department of Child Services to work with schools to develop a case plan for every child in foster care and to require parents who have lost custody to undergo drug testing if they seek reunification with their children. Before the 2020 session, DeVon was named chairman of the House Family, Children and Human Affairs Committee.

DeVon has been most visibly associated with education bills in recent sessions, including two that threaded the needle between demands from the Indiana State Teachers Association and what the state’s Republican leadership said they could provide. In 2019, DeVon was tapped to carry a bill that Republicans advanced as a way to free up money within local school districts to increase teacher salaries by 5%; it provided incentives for school districts to put 85% of their budgets into classrooms rather than administrative costs. The bill passed along party lines, with Democrats arguing the better approach would be to include more money for teacher pay in the two-year state budget.

In 2020, as teachers continued to rally for higher pay -- something finally realized in the 2021 budget -- DeVon carried a bill that met another of their demands, to not include results of the state’s new ILEARN standardized test in evaluations of schools and teachers. Results from the test in its first year were much lower than those from previous tests, drawing concerns about their validity. The “hold harmless” provision applied for the next two school years. DeVon was among a majority of House Republicans to buck leadership in trying unsuccessfully to remove rape and incest as exceptions to the 2022 abortion ban; he eventually voted for the ban with the exceptions intact.

In 2018, after two unopposed runs for reelection, DeVon had a close call, winning over his Democratic opponent by fewer than 500 votes – one of several close calls or upset losses for Republican incumbents in suburban areas, which had been trending Democratic in recent elections. DeVon won by a similar margin over the same opponent, Granger cardiologist Donald Westerhausen, in 2020; with both of the campaigns spending over $150,000, it was among the most expensive legislative races in Indiana. – Kevin Morgan 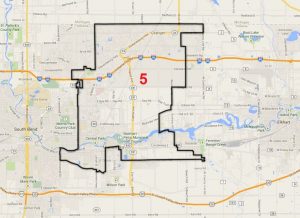