Indiana House District 18 is a long, narrow slice of north central Indiana that follows State Highway 15 south from the relative prosperity of orthopedics hub Warsaw to northern Grant County, where communities are dealing with the opioid crisis and reeling from the decline of manufacturing in nearby cities. It was represented for 32 years by David Wolkins, a retired teacher, coach and businessman from Winona Lake, an incorporated town in suburban Warsaw. Wolkins retired after the 2020 session, ending a career noted for his efforts to raise Indiana’s speed limit on highways and to scale back environmental regulations; Wolkins was chair of the House Environmental Affairs Committee and state chair of the American Legislative Exchange Council, often abbreviated as ALEC, a national group of conservative state legislators and business people.

His successor was Warsaw businessman Craig Snow, who was endorsed by Wolkins as well as legislative and community leaders in the area. Snow came out on top of a two-candidate Republican primary, beating a challenger more aligned with the social conservatism that has taken hold in nearby legislative districts, and overwhelmed his Democratic opponent in the general election by more than a 3-to-1 margin.  Snow’s campaign website, conspicuously displaying endorsements from Indiana Right to Life and the NRA, stressed traditional Republican themes such as support for small business and economic development; it also made a point of mentioning his wife’s job as a kindergarten teacher and his commitment to education as a legislative priority without explicitly endorsing calls for statewide pay raises for teachers.

In the 2021 decennial redistricting, with his first term barely underway, Snow found his residence drawn into another incumbent Republican's district, the 22nd -- but the incumbent was iconoclast Curt Nisly, longtime thorn in the side to caucus leadership, whom Snow wound up dispatching by a nearly 3-to-1 margin. – Kevin Morgan 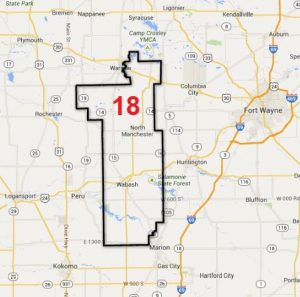