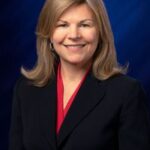 Indiana House District 87 encompasses much of the northeast side of Indianapolis, extending from the commercial corridors of Castleton around I-465 into the Washington Township enclaves of Meridian Hills and Williams Creek. It is a suburban and generally affluent constituency that was reliably Republican until 2012 when first-time candidate Christina Hale unseated a six-term incumbent by 51 votes. Hale’s popularity and a political realignment in the northern suburbs of Indianapolis gradually increased Democrats’ hold on the district, and when Hale resigned in 2016 to make an unsuccessful run for lieutenant governor, her successor was community environmental advocate Carey Hamilton.

Before serving as a representative, Hamilton owned an environmental consulting firm. Early in her career, Hamilton served as a program manager for the Indiana Department of Environmental Management. News coverage after her selection in 2016 by a party caucus identified bipartisanship as one of her goals.

As a legislator, Hamilton has advocated for women’s rights and firearms safety as well as environmental protections, though as a member of a Democratic minority still outnumbered 2-to-1, few of the bills that she introduces make it out of committee. In 2018, she introduced a bill that included Republican co-authors, was passed and signed into law; it limited the liability of owners of property along recreational greenways such as the Monon Trail in Hamilton’s district when someone is injured while using their property to access the greenway. In 2019, Hamilton was primary author on a bill to create a state tax credit aimed at defraying the costs of child care and other expenses when mothers return to the work force; the bill did not make it out the House Ways and Means Committee but was among those highlighted by Hamilton and three other women in the House Democratic caucus as efforts to close the gender pay gap in Indiana. Also in 2019, Hamilton joined Ed DeLaney, who represents an adjacent district in Indianapolis, in urging passage of legislation that they had authored aimed at reducing gun violence. In 2020, Hamilton also proposed a resolution to create a bipartisan task force for the purpose of recommending public policy action to combat climate change; it also failed to emerge from the committee to which it was assigned. Hamilton was one of several women in the House Democratic caucus to take the lead in arguing against the 2022 abortion ban, saying from the floor that she feared her two sons as adults might decide against living in Indiana because of its increasingly regressive public policies.

Hamilton won reelection in 2018 by more than 7,000 votes, a landslide compared to the margins Hale enjoyed, and increased the margin to 9,000 over her Republican opponent in 2020. — Emily Schabes 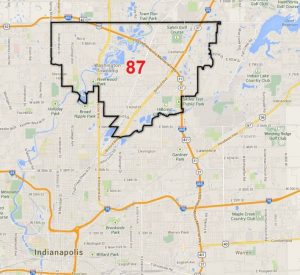