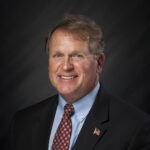 Indiana House District 46 covers most of the distance from Indiana University in Bloomington west to Indiana State University in Terre Haute, an hour’s drive that in some ways takes the traveler from one economy to another. Thoroughly branded as a college town, Bloomington doubled in population as it flourished in the knowledge-based economy that emerged during the past half-century. Associated more with manufacturing than with its smaller state university, Terre Haute and rural communities to its east – once the site of coal mines – have struggled just to maintain. The area’s hopes these days are pinned on plans for a new casino, made possible in 2019 by legislation that moved a gaming license from Gary to Terre Haute; advocates pushed the legislation in part as a way to turn around the economies of both cities.

The district has been represented since 2010 by Robert “Bob” Heaton, a Republican and owner of a Terre Haute financial services firm who is still best known as a backup forward on Larry Bird’s team at Indiana State, NCAA runner-up in 1979. Bird’s wife was among the contributors to Heaton’s 2018 reelection campaign.

As a legislator, Heaton’s most conspicuous efforts have centered on economic development in his native Wabash Valley. He was credited with securing $37.5 million in the 2015 biennial budget for renovation of the Hulman Center at Indiana State, and he played a key role in the Terre Haute delegation’s successful push for a Vigo County food and beverage tax to fund a downtown convention center. Heaton also was an early advocate of a casino in Terre Haute, authoring legislation for that specific purpose in 2018. It was incorporated into the more wide-ranging bill of 2019.

In a referendum that fall, Vigo County approved the new casino with 63% in support; more recently, the headlines have centered on possible complications in the plans due to an Indiana Gaming Commission investigation of the prospective operator. Also on the fall ballot was a schools referendum that passed with 54% of the vote. Heaton clashed with local teachers over his public opposition to it.

In 2022, Heaton voted with the supermajority to pass the landmark ban on abortion, and was among the minority of House Republicans to side with their leadership and all 29 Democrats in keeping exceptions for rape and incest in the bill.

Democrats held House District 46 for most of the previous three decades before Heaton’s election. His closest races were in 2012 and 2014 against a Vigo County social studies teacher. Heaton has defeated his opponents since by wider margins and in 2020, for the first time, was unopposed for reelection.. He will face a Democratic challenger in 2022. – Kevin Morgan 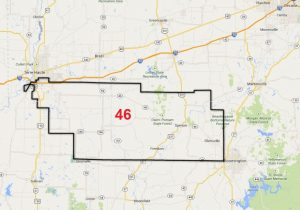